Fungi in our wood

At certain times of the year we have quite a few fungi growing in the wood. Although some of them are classed as edible, the children are taught not to touch just in case!

A lovely example of this toadstool which is neither edible nor poisonous, but has striking yellow custard coloured flesh. We have seen one on the glade was about 12cm across.

A very common fungus which grows on decaying wood. We have two tree stumps near the path which look like balding heads of hair and a birthday cake!

This species is classed as edible but not really recommended.

Averages 10cm across. Young caps are edible but can cause gastric problems so best avoided! 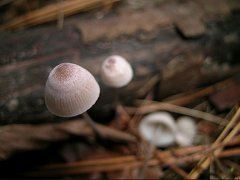 Doesn't look very nice - rather what you'd expect from the name!

Widespread but not very common. These are growing on an old tree stump and are about 10cm across. In the first picture you can see them emerging, below that fully open.

Another strange-looking fungus, this one is transluscent and floppy, just like a real ear!